Discussion of sightings in and around the Chorley area.

Wild and a breezy with a couple of heavy showers , 8 snipe were seen in flight on my arrival heading over the douglas 2 single birds also seen , fem goosander in flight , large starling flock held one very pale individual seen several times in flight and on the ground but could never get close enough to see if it was its rare cousin the rosy starling , 1 green sandpiper was on the great close pools , several kestrel sightings , over the railway the juv cuckoo was seen again flying low over the stubble field before flying into the railway line cover , 2 golden plover still present near to alma wood on the large flood water area , possible whinchat in this area but only seen from behind ( short tailed bird flying away from me ) .
Top

3 Greenshank tonight, 2 on Great Close and one on the flooded field to the east of Alma Wood where it was joined by 2 Golden Plover and around 10 Pied/White Wagtails. Around 25 hirundines were in the same field. Also seen were 2 Kestrel, 1 Common Buzzard and 1 Lapwing.
Len Poxon

Evening visit bumping into Len and seeing the lesser spotted Neville skulking in the distant undergrowth.

Pretty sure I saw 3 Greenshank in flight over the Alma Wood pool. I had earlier seen 2 on Great Close floods and Len had seen 1 nearer Alma Wood. Hopefully Neville can confirm that there were 3.

Raptors were 3 Kestrel 2 Sparrowhawk and 2 Buzzrads.

6.00-8.45pm - there were 4 greenshank in the end, those 3 seen in flight had left 1 behind on the pool nr Alma Wood. All 4 then convened on the pool the other side of the hedge (where the 2 plovers have been residing). Other sittings as per Len/John with a juvenile grey wagtail among the pieds, flock of15 snipe, single swift, 2 green sandpipers alarm calling from the Great Close pool adjacent to High Lane before flying off towards the Douglas and then finally c. 200 mixed gulls heading towards the coast as dusk approached.

Greenshank takes Chorley species total for the year to 131
Top

First attempt at digi-scoping with new smartphone. Record shot only, so no sniggering. 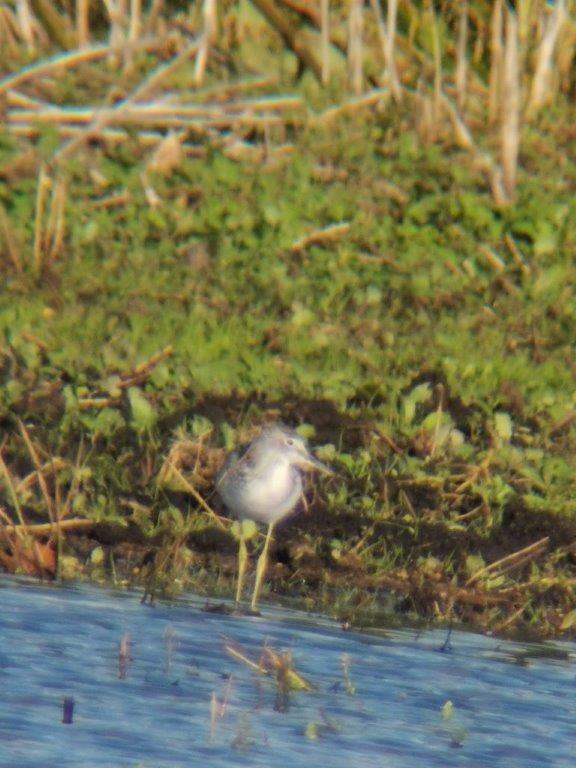 Cuckoo still present this morning near railway together with single Greenshank and 2 Golden Plover in field east of Alma Wood.

Another new wader was a single Curlew between the double hedge and the railway.

Sightings much as John's, but unfortunately there was no sign of Greenshank by the time I got there. A mini-compensation was a party of 5 White Wagtails, which I missed on Spring passage. Two Snipe dropped into the cuckoo field while I was scanning.
Butterflies:- GV / Small White 10-20, Painted Lady, Red Admiral 2-5

White Wagtail takes me to 123
Top

No sign of the mythical Cuckoo again!
Len Poxon