I went to the moss late in the hope of seeing some owls, but was unlucky in that respect.

Birds Seen/heard: Main feature was a herd of swans in lock meadow, consisting of 9 adult Mute Swans,
6 Juvenile Mute Swans, 8 adult Whooper Swans, 7 juvenile Whooper Swans and 1 adult Bewicks Swan (my first ever !). I took me quite a while studying my photos to realise that it really was a Bewicks Swan.

There were large flocks of Jackdaws & Rooks and a Common Buzzard was disturbed feeding on a carcass of a dead woodpigeon.

Bewicks Swan takes me to 132 species in the Chorley Nats area this year.
Len Poxon 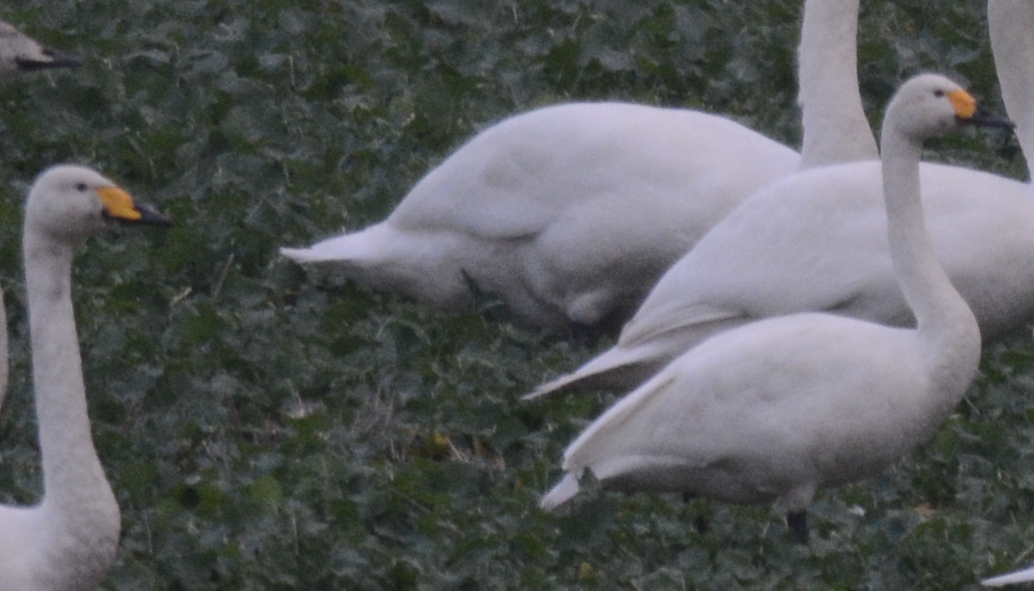 The points I went off are as follows:

According to internet articles the Bewick's black edge is not always rounded, but can be square see http://www.worldbirds.co.uk/whooper_swan.aspx?key=17
Len Poxon

I agree with Len that it is a Bewick SWan as I have seen Bewick's not only in the past at Martin Mere but also in Norfolk and at Slimbridge. I also have a copy one of Peter Scott's books about his research on the bill patterns of Bewick Swans and some look just like the one in Len's photo.
Top

I see black extending along the culmen beyond the nostrils towards the eye. There is a slight concave structure to the bill, dropping slightly where it is yellow and then straightening when it is black. The head is more rounded than the other yellow billed swans with a shorter distance between eye and nape. The bird is distinctly smaller than the other yellow billed swans. I have read nothing in all my literature to suggest that you could call this anything other than Bewicks Swan. In recent winters there seems to be a single bird that keeps turning up at Martin Mere. Perhaps this is it on its wanders? (Edit... Nope - just looked at my photo from last winter and that bird also had black extending along the upper bill as well)
Top

Thank you all for your comments, a couple more photos below:

- My first view of the swans, with a single yellow billed bird in amongst the Mute Swans. 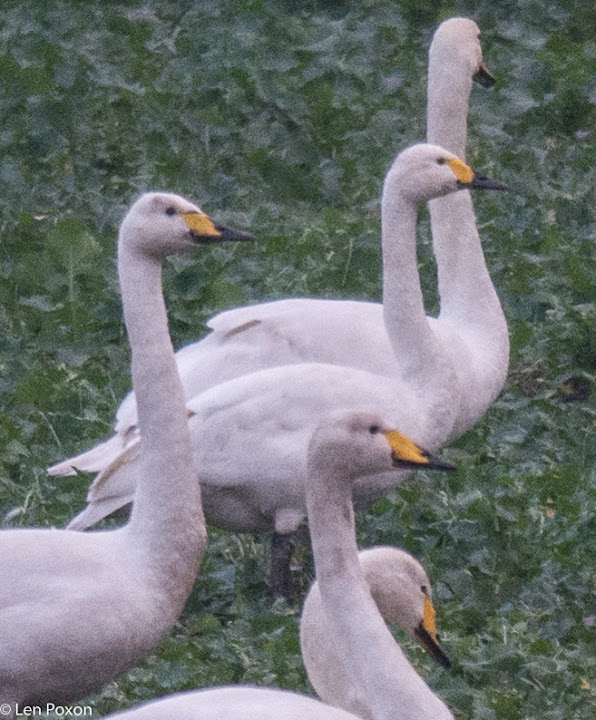 That first picture really seems to show the classic goose like structure that Bewicks can show. The size difference with the Mute's is really significant as well. Excellent find.
Top

Certain that is a Bewick - seen good numbers over years - another good id point I always found in poor light is the neck - shorter proportionately to body than other swans - clearly shown in the photos - great photos and record!
Brian
Top

As Brian says it's a great record, especially as they are now quite rare in the North-west. I'm not sure any have been recorded at Martin Mere as yet this winter. Pity it wasn't there this morning!
Top

Thanks for all your comments, it pays to look in detail (most times

); now, where is that Tristis than Ian Ball spotted!!
Len Poxon

Single Bewicks now been reported on the Ribble Estuary at Hundred End (via Martin Mere website). No sign yet of the Chiffchaff again but I have been at work during a lot of the daylight hours.
Top
Post Reply
15 posts • Page 1 of 1