Swift Awareness Week 27th June to 5th July. Our nearest group is Bolton & Bury Swifts, who are on Facebook & Twitter.

The next field trip is a visit to Eyes Lane, Bretherton, on Saturday 2nd November.

Field Trip Notes.
Before and after the walk I'd stopped off at Euxton Hospital to check for the Waxwings noted there yesterday. None present at 0815-0830 and 1230hrs, one of the trees near the entrance seemed to be mostly stripped, the other still full of berries and being eaten by Blackbirds and a Blue Tit.

9 walkers, more interested in the wildlife than something happening in Japan and not bothered by occasional drizzle and light rain, set out at 0930hrs from near Ashcroft's Farm entrance, along Eyes Lane to the River at Red Bridge and returned by the same route, finishing at noon. Being towards the centre of the low pressure the winds were light.

The main natural noise was the near constant calling of Pink-Footed Geese, heard throughout the walk particularly at the start. Spectacular.

Birds seen/heard:
Magpie, Robin, Great Tit, Woodpigeon, Mallard (on a pond 300m west of Eyes Lane, on the River, and flying over), Canada Geese, many Pheasant some being brought down by shooters, Pink-Footed Geese - estimates well over a thousand in the fields east of Eyes Lane and in flight, Farm/hybrid ducks, Carrion Crows, Blue Tits, flocks of Redwing (>50), Grey Heron (3 together west of Eyes Lane before the shooting started), Long-tailed Tits (flock ca 10), Dunnock, Nuthatch, Starlings (flock ca 40 over), Wren, Skylark (flock ca 20 over, and others in 2s/3s), Chaffinch, Kestrel, Fieldfare (flock ca 10), Goldfinch, Buzzard (2 S of R.Yarrow), Moorhen (in ditch and a few on the River - nothing else bar Mallard on the River), Grey Wagtail (1 over near the River), possible 5 Greenfinch in flight near the River, Pied Wagtail. After the shooting began a Peregrine and Sparrowhawk seen flying S over Eyes Lane, and Snipe were seen rising, a likely Partridge seen rising but unconfirmed sp. Great Spotted Woodpecker and Mistle Thrush noted back near the cars...

Mammals:
3 Grey Squirrels, a dead Rat beside the road, and a Brown Hare moving east along the bottom of the R Yarrow bank.

Please make any additions if I've missed anything.
Top

Excellent report Jed -good to see new faces on the trip -hope you enjoyed it.
Top

A couple of corrections to the fungi:

The Parasol was actually a Shaggy Parasol
The fungi I provisionally identified as Soapy Knight was actually Clouded Funnel. At the time I noted that on one of the caps there was another fungi growing on top, which I thought at the time was a malformed fungi. However it appears that this was a rare fungi called the Piggyback Rosegill. See photo below. 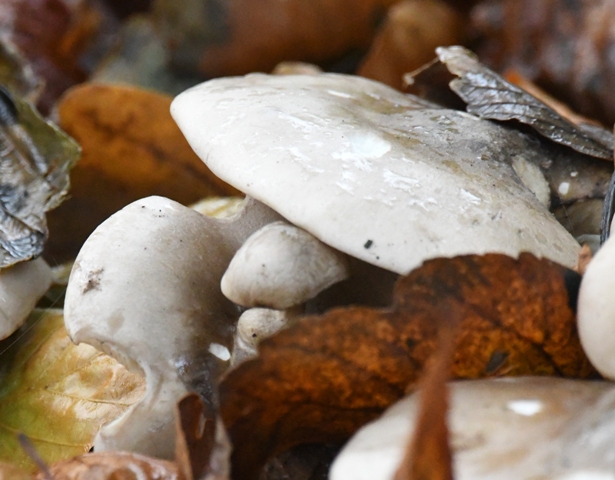